Food is basically can be referred to as anything that when consumed provides essential nutrients and energy to the body. These nutrients include carbohydrates, fats, proteins, vitamins or minerals. Food is basically obtained from plant or animal. Traditionally gathered through hunting, gathering and agriculture, it is nowadays being provided by many different chains and agencies for some of which it is a source of business and earning. In the past, food was just considered a source of energy and people used to eat anything that satisfied their energy requirements and helped in growth. However in modern times, the skill of cooking and the preparation of food has become an art and people have recently adopted the trend of adding variety and skills in the preparation and consumption of food thus making the culinary a complete science. This resulted in the preparation of new kind and types of foods in different cultures. Each culture has its unique characteristics in their foods and such foods are referred to as cuisines. 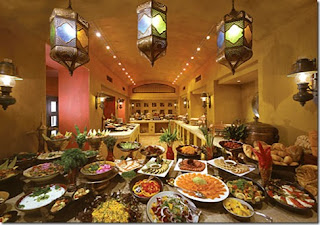 Middle Eastern food is famous all across the world. It is the food that is originated from the areas of Middle East and West Asia. The commonly used ingredients are olives, olive oil, honey, sesame seeds, dates, sumac, chickpeas, mint and parsley. Staple foods usually contain wheat and rice and barley and maize are commonly used as well. Bread is also an integral part of every meal. Various types of rice are produced and consumed and the dishes usually contain meat, vegetables, sauces, nuts and/or dried fruits. The food is normally prepared in Ghee though olive oil is used for this purpose as well. Several spices such as cinnamon, clove, cumin, black pepper and chili pepper are used in the cuisines of Middle East. Garlic is used often as well. The complete food eating habits and dishes in Middle East are based on Islamic principles and thus exclude various things that are prohibited (haram) in Islam. Therefore Lamb meat, mutton and beef are the meats used in the region and pork is rarely eaten in the region.

In the Middle East, some international cuisines or cuisines from other part of the world are quite famous and are usually eaten by the people of UAE. One of these cuisines is Chinese food. This food is basically originated from China but has become popular in almost all the parts of the world due to their unique taste and almost no or mild spices. There are various restaurants all over the region of UAE that provide dining services for Chinese food “Chinese restaurant in sharjah” as well as 24 hour food delivery Dubai Services. Some of the popular Chinese restaurants in UAE include Beijing restaurant, Da Shi Dai, Chopstix, Chinese Treasure and Long Yin.

Another cuisine that belongs to some other area of the world but is quite famous in UAE is Indian Food. These foods are based on the Hindu and Jain beliefs and are basically vegetarian foods. The dishes are mostly prepared using locally available spices, herbs, vegetables and fruits. One reason of the popularity of Indian Food in UAE is because of the fact that most tourists come in UAE from Asia. There are numerous restaurants present in UAE which provide Indian Cuisine however Moti Mahal is one of the most prominent restaurants among them. It is particularly famous for its Tandoori Chicken. Kwalty, Asha, Nihal, Ruchi, Haveli and Zari Zardori are the names of some other restaurants that provide Indian Cuisine and pizza delivery in Abu Dhabi.